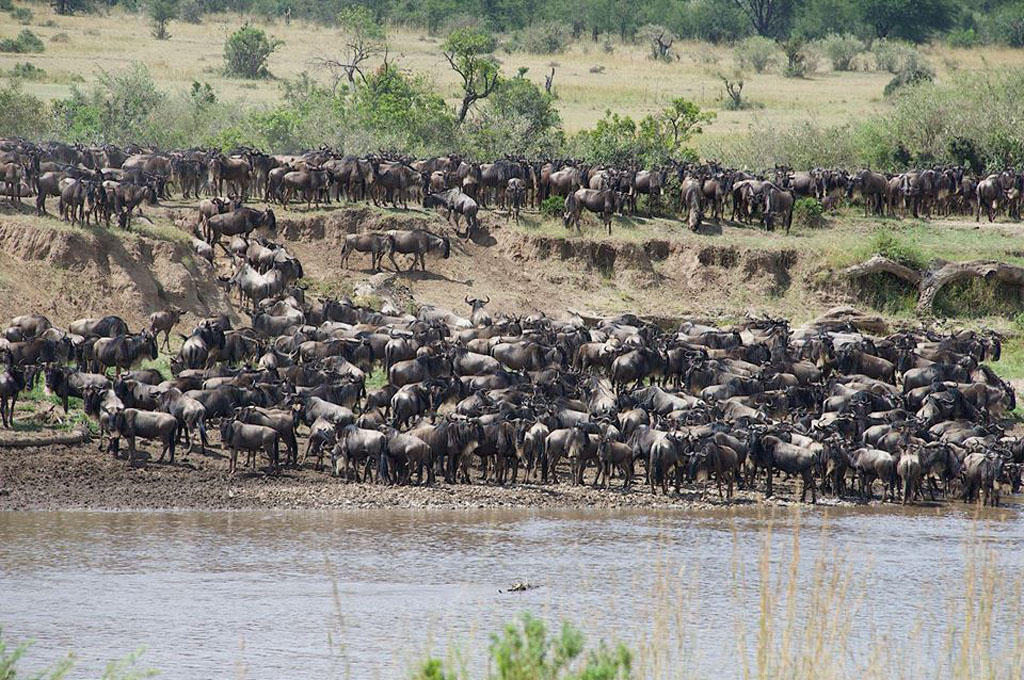 The Great Migration in Northern Serengeti:

Wildebeest and zebras in the Serengeti eco-system are the actors of “the greatest show on Earth”, they are part of the largest migratory movement of wild animals anywhere in the world, about 2,000,000 ungulates constantly moving in search of pastures and water.

During this time of the year the migrant herds head north, towards the dry season grazing grounds. It is a great time for the epic crossings of the Mara River, haunted by huge crocodiles.

The first wildebeest to arrive at the river are very reluctant to cross, but as the pressure builds from the rear they are eventually left with little choice and the spasmodic crossings begin.

By the end of August some wildebeest cross into Kenya and enter the Maasai Mara, while many others stay in in Tanzania.

In actual fact there as much of the Mara River in the Serengeti as there is in the Kenyan Maasai Mara.

But whereas on the Kenyan side there is accommodation for in excess of 5000 visitors, which translates into heavy tourist pressure, over “our side” there is just a handful of excellent small camps.

Departure from Kilimanjaro Airport or from Arusha town for Karatu, Ngorongoro region.

If your flight lands before 9 a.m. you can choose between the following activities:

(2) Visit Mto wa Mbu Village. It is a big agricultural village at the bottom of the Rift Valley Escarppment, an interesting place to get an insight of contemporary life in rural Tanzania.

Here one can find people belonging to the different ethno-linguistic families which compose the complex ethnographic puzzle of Tanzania.

Lodge 3 –  The Manor at Ngorongoro

Today is dedicated to game drives in the Ngorongoro Crater.

In the evening you will reach the Serengeti.

These days are dedicated to the Serengeti National Park, Tanzania’s most famous park and one of the most famous in the world.

The Serengeti ecosystem is home to over 1.5 million wildebeests, 400,000 zebras, 500,000 Thompson gazelles, more than 2,700 lions, 1000 leopards, 500  cheetahs, huge herds of elephants, elands, impalas, waterbucks, giraffes, ostriches, and genets. The rivers offer the perfect habitat for crocodiles and hippos; there are more than 400 species of birds.

The 15,000 square kilometres (9320 sq miles) of the Serengeti National Park are only the major portion of a larger ecosystem, which includes the Ngorongoro Plains (the flat region to the north east of the Ngorongoro Crater, which plays an important role in the famous migration and is administered by the Ngorongoro Conservation Area) and the Maasai Mara (which is located further north, in Kenya).

Here the orography, the soil composition and, consequently, the type of vegetation, allow unmatched animal sightings in Africa. The subsoil, made of volcanic rocks especially in the south, prevents the growth of tall trees and grasslands prevail, so the open environment fosters sightings.

Wildebeests and zebras in the Serengeti, always in search of new pastures and water, are part of the largest migratory movement of wild animals anywhere in the world, the Great Serengeti Migration which between July and October congregates in the northern sector of the Park.

Departure for the region of Lake Natron through north-eastern  Serengeti.

Lake Natron is 50 km (30 miles) in length and about 25 km (15 miles) in width. It is a highly alkaline lake that occupies a depression created by the Rift Valley, a lava desert area of rugged beauty in the extreme north of Tanzania.

Natron is the usual nesting area for millions of pink flamingos  who are fond of the cyanobacteria present in high concentration in the lake water, especially during the dry season (June to October), so they flock to its shores.

The area is extremely arid and dominated by the perfect cone of Oldoinyo Leng’ai, the volcano sacred to the Maasai people, who consider it the abode of the divinity Leng’ai.

At an altitude of nearly three thousand metres above sea level, Oldoinyo Leng’ai is the only volcano in the world that emits natron-carbonatite lava, rich in sodium carbonate, with very low viscosity and temperatures since it rises at 500–590 °C.

When the lava is flowing it resembles a kind of very fluid, dark “river” that some have likened to a stream of mud. After emission, when it comes into contact with water, the colour of natron-carbonatite lava changes rapidly to white, so that the top of the volcano seems to be cloaked in snow.

The last eruption was in December 2007 – January 2008 (which we witnessed in person as we were right there!) and it made the climb to the volcano summit even tougher since the lava completely erased the temporary trail that could sometimes be followed, and the small flat areas for stopping to catch your breath have gone completely. At that time we stopped offering trekking on Oldonyo Leng’ai.

Arrival at your camp for (late) lunch, then hike along the Engare Sero creek, which flows through a narrow rocky gorge, leading to a beautiful waterfall where it is possible to swim. This isn’t a difficult trek but part of the route requires walking through water (which rarely reaches the knee height) so requires swimwear and non-slip footwear (reef shoes).

The trails to reach Lake Natron (both from the Serengeti, taking about five to six hours, and from Manyara, taking about three to four hours) are extremely scenic and you will be able to meet the Maasai communities who live off most tourist circuits.

Accommodation at Natron is limited and pretty basic.

We recommend this itinerary for travellers who seek a different experience to the classic safari.

Early morning walk to the lake, to admire a landscape shaped by lava and water.

Then drive through the scenic Crater Highlands to Engaruka, to meet the tarmac road at Mto wa Mbu and proceed to the Tarangire National Park where you will have a first game drive in the afternoon.

With its 2,600 square kilometres (1600 sq miles), Tarangire is a different habitat to the other northern parks.

It is 30 km across (18 miles), from east to west, and 100 km across (62 miles), from north to south. Considered a “park of giants”, Tarangire is home to huge baobab trees and large herds of elephants, as well as lions, leopards, antelopes, gazelles, wildebeests, zebras, buffalo, and about five hundred species of birds, both resident and migrant, the highest concentration in Tanzania.

Back to Arusha for lunch and transfer to Kilimanjaro Airport/Arusha Airport.