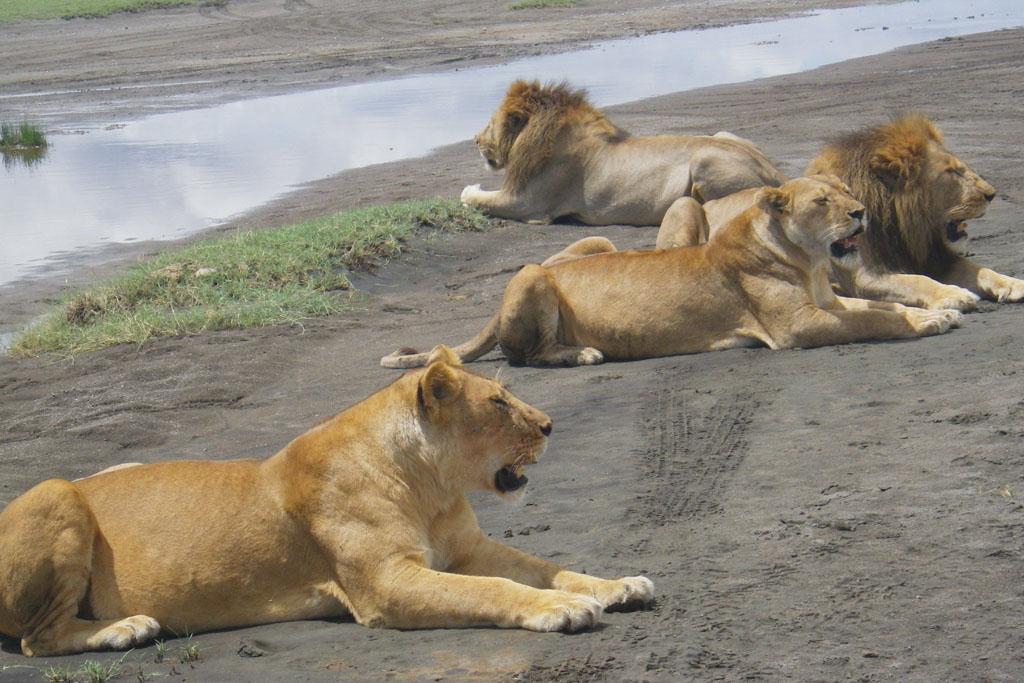 Among many animal species there are large colonies of baboons, vervet monkeys and other species of monkeys, elephants, giraffes and three hundred and eighty species of birds

With its 2,600 square kilometres (1600 sq miles), Tarangire is a different habitat to the other northern parks.

It is 30 km across (18 miles), from east to west, and 100 km across (62 miles), from north to south. Considered a “park of giants”, Tarangire is home to huge baobab trees and large herds of elephants, as well as lions, leopards, antelopes, gazelles, wildebeests, zebras, buffalo, and about five hundred species of birds, both resident and migrant, the highest concentration in Tanzania

Proceed to Karatu, on the Ngorongoro Highlands.

If your flight lands between 9 a.m. and 1 p.m. it will still be possible to reach Kartu, yet with no activity en route.

Game drives in the Crater.

It is what remains of an ancient volcanic cone, whose peak collapsed about two and a half million years ago, creating the current caldera: a truncated cone containing a large “pan” with a diameter of 16/20 km (9/12 miles) with raised edges reaching about 600 metres (2000 feet) over the ground. This basin has developed into savannah inhabited by more than 25,000 big game and every species typical of the region, with the exception of the giraffe (which does not find food here) is represented in the Ngorongoro Crater.

In the evening you will reach central Serengeti.

Game drives in the Serengeti National Park, Tanzania’s most famous park and one of the most famous in the world.

The Serengeti ecosystem is home to over 1.5 million wildebeests, 400,000 zebras, 500,000 Thompson gazelles, more than 2,700 lions, 1000 leopards, 500  cheetahs, huge herds of elephants, elands, impalas, waterbucks, giraffes, ostriches, and genets. The rivers offer the perfect habitat for crocodiles and hippos; there are more than 400 species of birds.

The 15,000 square kilometres (9320 sq miles) of the Serengeti National Park are only the major portion of a larger ecosystem, which includes the Ngorongoro Plains (the flat region to the north east of the Ngorongoro Crater, which plays an important role in the famous migration and is administered by the Ngorongoro Conservation Area) and the Maasai Mara (which is located further north, in Kenya).

Here the orography, the soil composition and, consequently, the type of vegetation, allow unmatched animal sightings in Africa. The subsoil, made of volcanic rocks especially in the south, prevents the growth of tall trees and grasslands prevail, so the open environment fosters sightings.

Wildebeests and zebras in the Serengeti, always in search of new pastures and water, are part of the largest migratory movement of wild animals anywhere in the world.