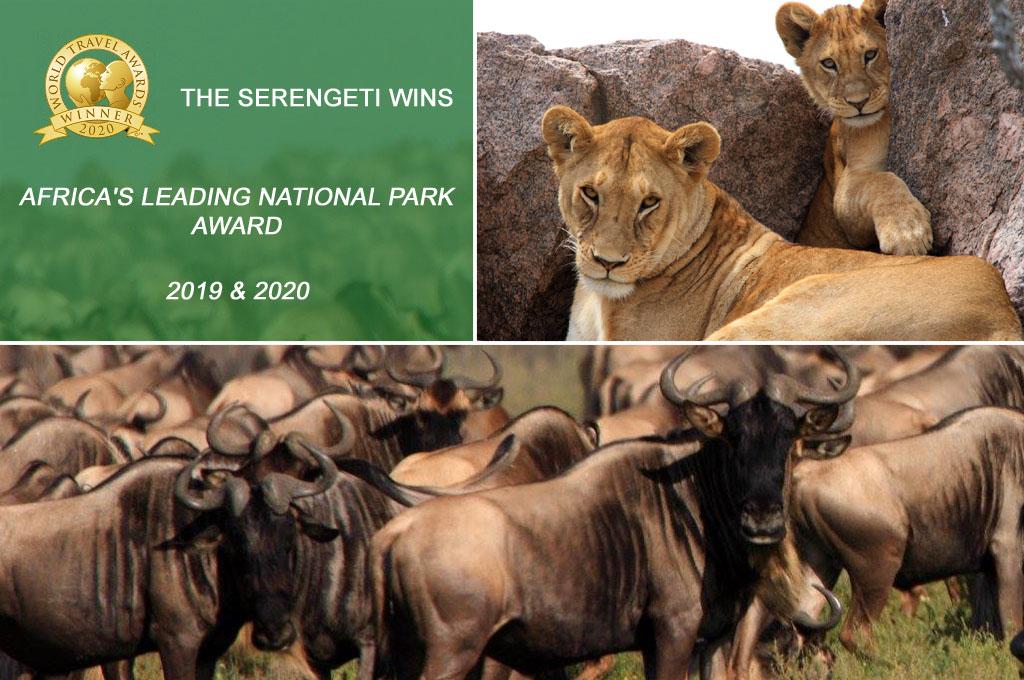 Serengeti National Park won the award for the best at the 2020 World Travel Awards.

Serengeti means “endless plains” in Maa, the Maasai Language and it is the Park which embodies the essence of the African savannah.

It has ben featured in uncountable documentaries and has been the set of several movies. Scientist, ethologists and documentaries have brought the Serengeti to be known worldwide.

The Serengeti ecosystem is home to over 1.5 million wildebeest, 300,000, 500,000 Thompson gazelles, more than 2,700 lions, 1000 leopards, 500 cheetahs, huge herds of elephants, elands, impalas, waterbucks, giraffes, ostriches, and genets. The rivers offer the perfect habitat for crocodiles and hippos; there are more than four hundred species of birds.

The 15,000 square kilometres (9320 sq miles) of the Serengeti National Park are only the major portion of a larger ecosystem, which includes the Ngorongoro Plains (the flat region in the north east of the Ngorongoro Crater, which plays an important role in the famous migration and is administered by the Ngorongoro Conservation Area) and the Maasai Mara (which is located further north, in Kenya). Here the orography, the soil composition and, consequently, the type of vegetation, allow unmatched animal sightings in Africa. The subsoil, made of volcanic rocks especially in the south, prevents the growth of tall trees and grasslands prevail, so the open environment fosters sightings.

The Serengeti eco-system hosts the largest migratory movement of wild animals in the world, it is the famous Serengeti Migration, also known as “the greatest show on Earth”, whose actors are 2,000,000 ungulates – wildebeest and zebras, always in search of new pastures and water.

It has been declared Unesco World Heritage Site in 1981 for its uniqueness and rich biodiversity.
Reach the most suitable itinerary